The Big Board of Taekwondo Indonesia (PBTI) expects to IT Pengprov through pengcab scattered in the region of North Sumatra to be able to regenerate the seeds of athletes achievers. 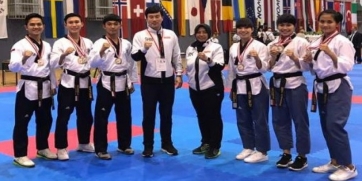 Chairman of the Indonesian contingent, Alex Noerdin, set a high target for the Red and White Team that will compete in Islamic Solidarity Games 2017. Alex hopes Indonesia can become the overall champion in ISG fourth edition.

The board of Taekwondo Indonesia (PBTI) has proposed 13 taekwondoin from the Kyorugi (tarung) and the (Poomsae) category to the Indonesian Gold Program Implementation Unit (Satlak Prima) to prepare for the upcoming SEA Games 2017.

Email: This email address is being protected from spambots. You need JavaScript enabled to view it.